The site is a disused quarry in a volcanic boss on the top of a promontory of high ground.  The quarry is about 24 x 15m in size and 2.5m deep.  It offers one of the best and most extensive exposures of the Ordovician igneous intrusions into the local silver-grey shales of the early Ordovician Bronsil Shale Formation.

About half of the circumference of the quarry shows an exposure of the intrusive rock, which is red coloured on the weathered faces.  The rock appears fairly uniform in nature but the three samples taken show a large variation.  There is a great deal of rubble remaining from which good samples can be obtained of strong but weathered rock. No contact with the surrounding shales is exposed.

At Fowlet Farm Quarry, the intrusion is described by geologists as a spilitic andesite with a porphyritic texture. It is set in a microcrystalline groundmass of zoned oligoclase or albite, together with minor amounts of the minerals chlorite, apatite, magnetite, ilmenite and pyrite. Andesite is a rock consisting of the mineral oligoclase (a sodium-bearing plagioclase feldspar) with one or more mafic (iron-magnesium rich) minerals.  The presence of ‘spilite’ suggests the andesite has been chemically altered by a reaction with sea water or hot fluids. The term ‘porphyritic’ refers to the presence of crystals that are visible to the naked eye and these are set in a background (or groundmass) of microscopic crystals of plagioclase feldspar, chlorite and other minerals present in trace amounts. 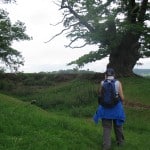 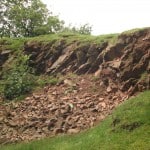 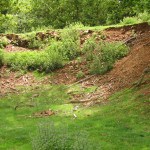 Hardie, W.G., 1969, ‘A Guide to the Geology of the Malvern Hills and Adjacent areas’, Worcetershire Education Committee, pp. 54. 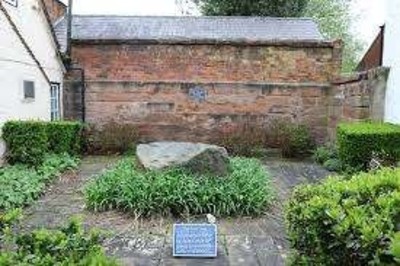