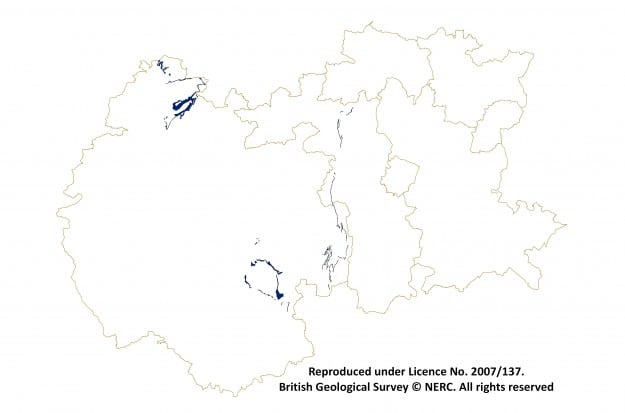 In Worcestershire, the outcrop of Silurian rocks generally follows a north-south linear trend, beginning just north of the Malvern Hills and continuing along the central and eastern half of the Teme Valley, before splitting into two outcrops around Abberley.

The Aymestry Limestone falls within the Mid-Silurian Ludlow Series; a succession represented by the Lower Ludlow Shale (containing the Elton Formation), the Aymestry Limestone and the Upper Ludlow Shale. The type area containing the Ludlow Anticline in northwest Herefordshire has been studied in some detail and is subdivided using the rich variety of fossils. The lithologies in this area change from deposition in a shallow, continental shelf in the east, to a deepening continental slope in the west.

Rocks of the Ludlow Series have been steeply folded to the west of the Malvern Hills. They occur in the May Hill area, the Woolhope Dome and the anticline on Shucknall Hill. They are also found in the Ludlow Anticline and in northwest Herefordshire, where the entire succession of the Elton Formation can be seen in Mortimer Forest.

In Worcestershire this unit forms a narrow ridge, and runs roughly parallel to the Much Wenlock Limestone ridge in an almost continuous linear fashion from Malvern to the Abberley Hills. The rock is made up of siltstones with argillaceous and nodular limestones, which are sometimes fossil-rich. The rock marks a period when sea-level fell, allowing for the formation of limestones. The top and bottom margins of the formation grade into the overlying and underlying Ludlow Sales. Despite its bold feature on the landscape, good exposures, like those seen in the Much Wenlock Limestone, are normally only seen in quarries, which were dug for aggregate or lime.

In Herefordshire the Aymestry Limestone forms a bold but narrow ridge wherever it crops out. It consists of limestones and calcareous siltstones. Around the Woolhope Dome the beds dip down the slope and landslips have occurred on some of the thin bentonite (volcanic ash) bands, which occur throughout the formation. The rock is  poorly fossiliferous, though there are occasional bands of Conchidium knighti such as those seen in Leinthall Earls Quarry. The fauna is similar to the upper part of the Lower Ludlow Shale, except that corals are more common.

March 2, 2011 Warren House Formation Read More
We use cookies on our website to give you the most relevant experience by remembering your preferences and repeat visits. By clicking “Accept All”, you consent to the use of ALL the cookies. However, you may visit "Cookie Settings" to provide a controlled consent.
Cookie SettingsAccept All
Manage consent