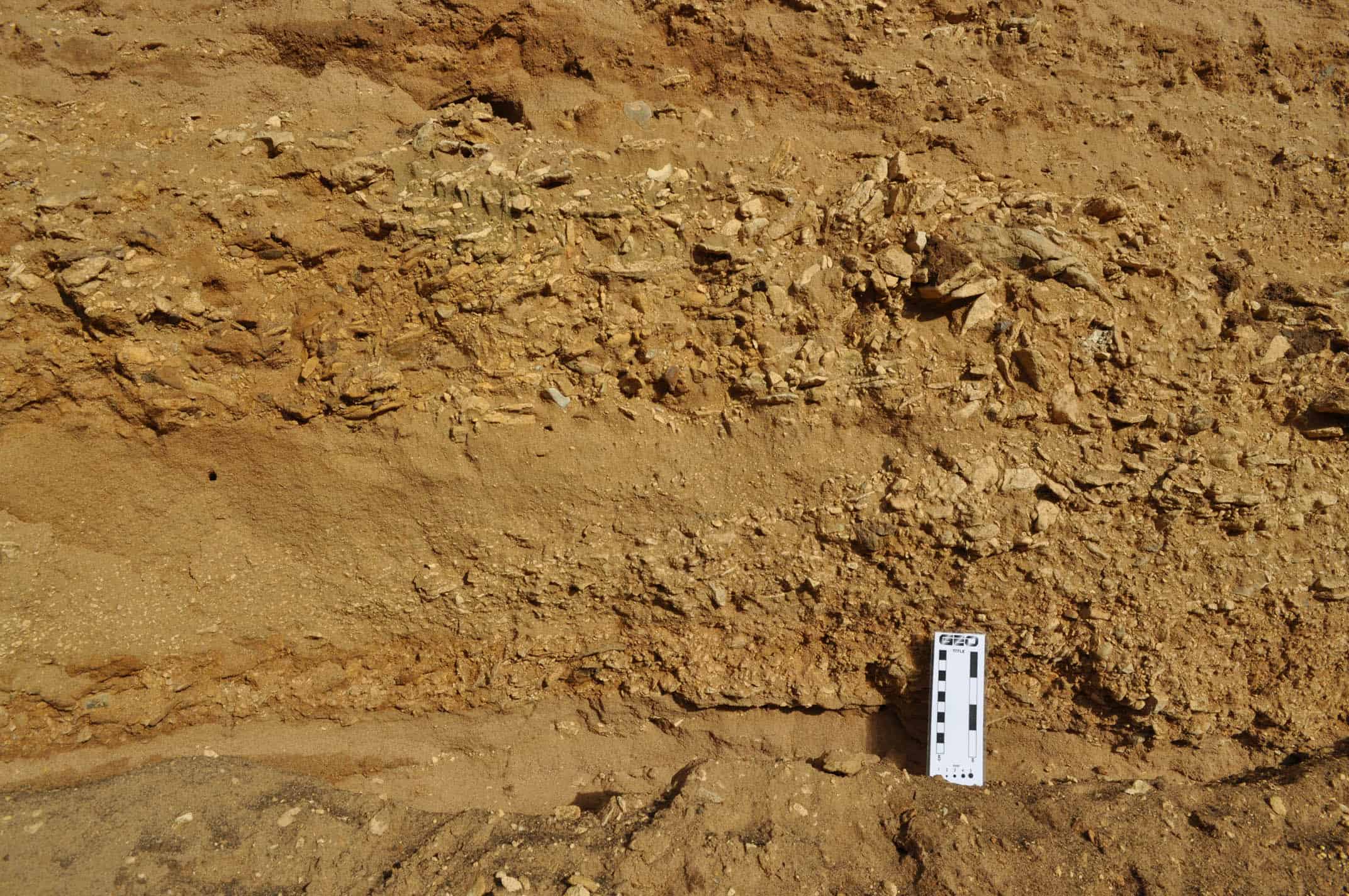 There is a hiatus of around 168 million years in Herefordshire and Worcestershire between the Jurassic and Quaternary periods, and no rocks are found at the surface dating to this time. After about 58 million years ago,  there was a gradual cooling of the Earth’s climate, reflecting the migration of the Antarctic continent into the south polar region, and the partial surrounding of the Arctic ocean by drifting northern hemisphere continents. The cooling became particularly pronounced at around 2.5 million years ago, marking the beginning of the Quaternary Period. This was characterised by repeated oscillations of warm and cold episodes, driven by variations in the amount of solar radiation received by the Earth’s surface. Some of the cold periods resulted in extensive glaciations (ice ages), separated by interglacials.

The complex nature of glacial and interglacial phases means that they destroy and rework previous deposits. This has created a fragmented, yet extensive network of material of various ages and depositional environments within Quaternary time. Sediments laid down within, or under a glacier or ice sheet are termed glacigenic deposits. In the two counties firm evidence is only preserved of two glaciations. The first took place in the Anglian Stage, which occurred about 500,000 years ago, and is now considered to include both Anglian and Wolstonian glacial deposits. The second is the much more recent Devensian glaciation, taking place about 25,000 years ago.

The Risbury Formation is a series of glacial deposits that record the advance and retreat of a Middle Pleistocene ice-sheet across Herefordshire into west Worcestershire. Ice contact, glaciolacustrine, glaciodeltaic and glaciofluvial deposits are all represented in the Risbury Formation, with the majority of aggregate material sourced from glaciofluvial material. The unit is divided into six Members (described youngest to oldest):

This unit shows the final stages of retreat of the ice seen in the pits in the Portway – Burghill area of Herefordshire. There is an extensive section of this unit at Upper Lyde Pit.

The unit preserves glaciotectonic forms typical of active deformation during minor oscillation of the ice-margin; bedding deposited as moraine during periods of glacial retreat, which were subsequently deformed during the readvance of the ice-margin. These features take the form of distorted bedding that lie in terminal moraine deposits. The contemporaneous Coddington Member is found in the palaeovalley of the Mathon River. The sediments are recorded in Brays and Warners Pits.

The Stoke Prior Member represents further oscillation of the icesheet during its retreat. There are excellent exposures in the pits at Stoke Prior School.

The Whitehouse Member is contemporaneous with the Stoke Prior Member and crops out in the palaeovalley of the Mathon River. They are also recorded in Brays and Warners Pits.

The unit is similar to the Franklands Gate Member and again preserves evidence of oscillations of the icesheet.

The Kyre Brook Member is the only Member of the Risbury Formation that is seen in Worcestershire. The sands and gravels deposited along the Kyre Brook Valley are believed to be the result of the catastrophic drainage of a glacial lake centred on Bromyard some 500,000 years ago. There are only two recorded exposures of the member, including the type locality at Hall Farm.

In Herefordshire, the unit is found on the margins of the Bromyard Plateau, such as the pit at Newton Farm, where there is evidence of a delta prograded into a proglacial lake.

This unit is also found on the margins of the Bromyard Plateau in close association with the Kyre Brook Member. It is also seen at the pit at Newton Farm.

Deposited at a similar time as the Risbury Formation, it consists of fluvioglacial sand, gravel and till deposits in the central and eastern parts of the Worcestershire. In the Hollywood area, the deposit is complex. A lower association called the Earlswood Till is interbedded with a separate unit of sand and gravel, which also occurs along the Ridgeway and as far south as Evesham. Overlying and interbedded with this sand and gravel is another till, consisting of orange-brown or red-brown clay, rich in pebbles. This complex relationship was formerly exposed in multiple sand and gravel quarries and landfill sites in the Redditch and Bromsgrove Districts, including at Shirley Quarry, Trueman’s Heath and Rowney Green. Till, sand and gravel patches in the Severn Valley may be cautiously placed within this formation as well. The largest spread of sand and gravel occurs around Tibberton, where they may be seen in the railway cutting. A well exposed patch can be seen at Woodbury Quarry.

Sand and gravel deposits in a restricted outcrop east of the Stour Valley around Hagley may represent an ice advance, centred on the Clent Hills, occurring c.180,000 years ago. If this is so, then the limited outcrop makes any exposures very important. The lack of exposures has made correlation difficult, but there is evidence to suggest that these deposits are from this relatively unknown glaciation period. The sand and gravels formerly exposed at Money Lane Pit and the destroyed SSSI at Madeley Heath are correlated with this formation.

March 5, 2011 Tarmac Quarries Read More
«»
We use cookies on our website to give you the most relevant experience by remembering your preferences and repeat visits. By clicking “Accept All”, you consent to the use of ALL the cookies. However, you may visit "Cookie Settings" to provide a controlled consent.
Cookie SettingsAccept All
Manage consent